I recently had the unique opportunity to migrate from Blogger to Wordpress easily with some help from someone who knows how to do these things. It was a chance to edit the blog as I have a lot of posts about preparing for law school and other things that aren't part of my life at the moment. I'll still leave my old blog up here at blogger, so those people who find that info useful can still access it. The process of migrating from Blogger to GoDaddy hosted Wordpress was a tad confusing so I'm posting this to help anyone else who may be considering it. Here is the new blog: Black Guidebook.


Total cost $80 for a year of hosting an domain registration. Total time spent, including editing out old posts 4 hours. Minimum amount of time needed to get up and running, 1 hour.
at 10:54 Links to this post

Have a Travel Mug of Green Tea 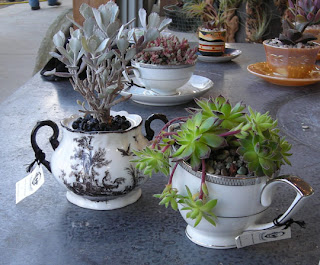 This Wednesday was Earth day so for this Friday's tea cups I chose these cute succulents planted in china cups As of yesterday, artist Rebecca Marshall of The Cat Bird Nest is selling them on consignment at Flora Grubb Gardens in San Francisco. Of course today I'll be having my tea in a travel mug on Alaska Airlines.
Going green while traveling is hard, but I have made a few little travel green steps:
So happy Earth Day, happy Friday and enjoy a cup of tea while plotting ways to be green this weekend.
The succulent tea cups are on sale at Flora Grubb Gardens (1634 Jerrold Avenue, San Francisco) for $24.95. Rebecca Marshall also has a line of handmade jewelry for sale; learn more about her work at The Cat Bird Nest.
at 08:54 Links to this post

Carry On for Weekend Trip 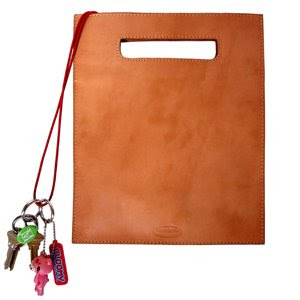 Tonight I'm off to Florida for a weekend meeting. I have 3 evenings to myself and my hotel is inside Disney World. We'll see if I can look up a friend who is nearby and spend some time hanging out. Simple weekend trips call for a 4-wheeled rolly bag and a handbag big enough for a few magazines and possibly a laptop. I love this leather bag from Lovegrove & Repucci. It is inexpensive and has a cute detail of the key ring. 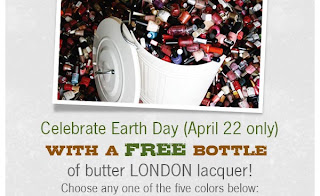 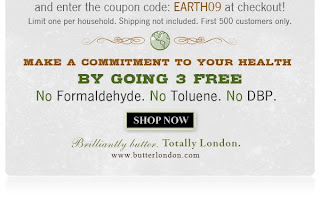 I like free stuff. I bet you do to. So here is a freebie (plus shipping) for you. Click on the image above to go to their website. The coupon code is EARTH09. I just tried it and its still working. I love the Butter London polish. I have posted about it before when I was loving their Take Me to Bed Red color.
at 10:33 Links to this post 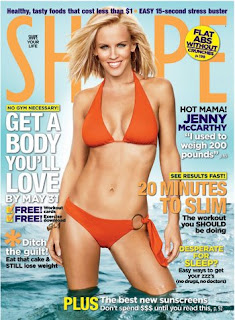 I haven't moved a muscle to exercise in almost a month. No, I didn't give up on WW. I had foot surgery and have been unable to do more than situps. My one month surgery milestone falls on the same day as my next flight, the earliest he would let me get back in the air. I did find it interesting that:

"The British Government has declared war on obesity, and among its first targets are drinkers. According to British government intel, 'The average wine drinker consumes an extra 2,000 calories a month - the equivalent of 184 bags of crisps.' This comes via The Telegraph, which further notes: 'Few middle class drinkers realise that a couple sharing a bottle of red wine a night are both consuming the equivalent of a Snickers chocolate bar in alcohol.' Appalling. You'd never see the French government release such data."

So my inability to have even an occasional glass of wine because of my meds is saving me a snicker bar every time. Of course, wine is actually ok for you in moderation and as long as you plan it into your overall day. Speaking of planning, I have been tracking and trying to hit my points every day, but with the complete lack of exercise I'll be happy to have a maintenance when I go back next week for weigh-in. I did find the above photo very inspiring. She's exactly my height (5'6") and got down from 211 lbs to her current weight using weight watchers and yoga.
at 16:17 Links to this post

The Apartment Therapy Spring Cure hits week 5 this week and oh my goodness they picked our worst room, the office. I never did our week 4 post so count this one for both. I wrote about planning our 5th wedding anniversary trip recently in my post "Daydreaming of Europe," well there has been a change of plans. I have been invited to a conference in Singapore the 16-20th of July. So rather than being apart, I'm bringing him with me instead. We'll be crossing the Pacific instead of the Atlantic this summer. I'm going to miss going to Amsterdam, but I'm excited because this will be our first trip to Asia together. Singapore itself isn't really going to fill a week of our time so we'll have a long layover in Hong Kong first. I am just now starting the planning for the trip. I have two fresh Moleskine books which I will distill all of the guidebook and internet info into. I like to make my own guidebooks. They are smaller to pack and more relevent than carrying a huge guidebook. I have now spent over 15 hours looking up things to do and experience. I have a feeling that unlike Paris or London, which really do have a Top 10 list of must sees, we'll be spending a lot of time wandering around.

Find me on Polyvore


adopt your own virtual pet!